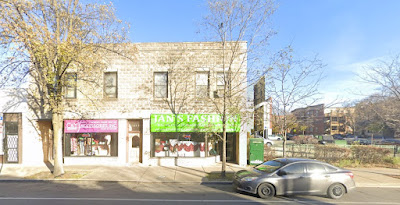 4507-09 N. Clark (Google Streetview)
Further expanding their real estate footprint in the community, Black Ensemble Theater has purchased the retail building at 4507-4509 N. Clark for $1,175,000.  The nondescript retail building currently has two wholesale tenants and apartments above. It sits roughly kitty-corner from the theater itself, which was built in 2010.

Black Ensemble has been utilizing a $5,000,000 grant from Mackenzie Bezos to buy nearby properties. We broke news in July 2021 that BET bought the then under development residential property at 4410 N. Clark, which is now close to occupancy.

This purchase helps BET further anchor in the community and is in line with BET founder and local resident Jackie Taylor's previous interest in buying multiple local properties, including the Somboon Auto repair building at 4501 N. Clark.  BET also bought and subsequently demolished the building at 4453 N. Clark in 2019 (currently an empty lot).

Plans are unknown at this time, but we are hoping for a new building at 4453 N. Clark and the soul food restaurant Ms. Taylor has expressed interest in bringing to the community. We think a soul food restaurant would be great for theater patrons and Uptown residents, particularly the many new neighbors coming to adjacent residential developments on Clark Street. Fingers crossed!