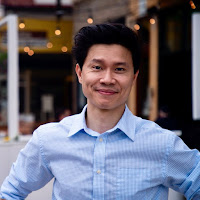 In Tuesday's primary election, Hoan Huynh came out the winner in a field of five Democratic candidates. He will compete in November's general election to represent Illinois's State House District 13, where he will go up against Republican candidate Alper Turan, who ran unopposed.
The office is currently held by Rep. Greg Harris, who will be retiring at the end of his term. The 13th House District includes much of Uptown, among other communities.
On Twitter, Hoan says:

"I’m honored to be the Democratic nominee for State Representative of the 13th District. Thank you to the voters, amazing grassroots orgs @AAMProgressives & @onepplscampaign, @ChicagoTM, campaign team and our fantastic volunteers. This is our movement. #TeamHoan #Chicago"
"I want to take this opportunity and thank the other candidates on the ballot @eileendordek, @SergMojica, Andy Peters, and Joe Struck who showed courage to run for office and to ensure that our democracy is well and strong. I look forward to representing all of us in Springfield."

Portion of Buena Park are located in State House District 12, represented by Democrat Margaret Croke, who ran unopposed. She will go up against Republican nominee George Kemper in November, who also ran unopposed.

The small area between Winona, Foster, Broadway, and Goudy School is part of State House District 14, represented by Kelly Cassidy, who also ran unopposed in Tuesday's primary. She appears to have no one running against her in the November election.