Fresh off receiving a $5,000,000 grant from philanthropist Mackenzie Scott (former wife of Jeff Bezos), Jackie Taylor's Black Ensemble Theater and its associated corporation have purchased 4410 N. Clark Street from MCZ Development for an as-yet unknown sum and appear poised to become a landlord.

The property as it appears today: 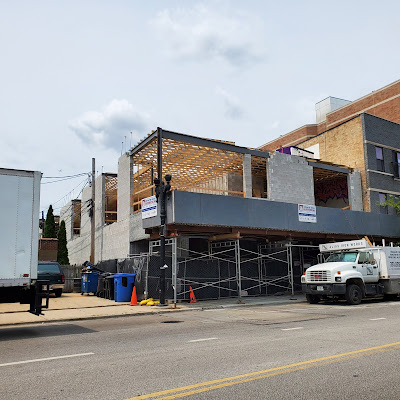 Before and 'after' shots (from the architect's proposal) of 4410 North Clark below:

Ms. Taylor opposed MCZ's development at 4511 N. Clark, but the two parties appear to have found common ground since then.

From legal filings, it appears the Black Ensemble Theater Corporation will make the first floor a live/work space, with 24 market-rate residential units above. Generating roughly $40,000 per month of rental income once complete, this building will provide the organization with a great income stream to fund theater operations going forward, and is the type of investment move that Taylor has been promising.

The under-construction building is still a shell, and it remains to be seen whether Taylor and Black Ensemble Theater Corp. will vary from the above design or the original plan for luxury units. We will update as we learn more.