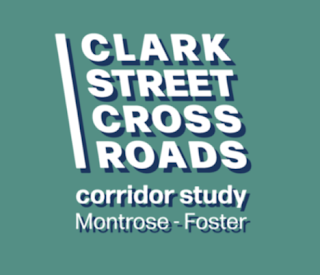 These buildings are expected to bring close to 200 new residents to a previously sleepy stretch of Clark that has seen numerous commercial vacancies in the nondescript one-and two-story commercial buildings that line the 4400-4600 blocks, particularly as first-and second-generation wholesale merchants move to the suburbs or online only.

Now, the City of Chicago, in partnership with Uptown United and local Clark Street facing block clubs, including Clark Street Neighbors Association, has launched Clark Street Crossroads, an open participation study of potential uses for expiring TIF funds from the Clark-Montrose TIF, which spans Clark through Uptown from Montrose on the south to the southern border of Andersonville at Foster:

The study has an online interactive map for comments and a Survey Monkey component. There will also be an open to the public online workshop (registration required) on Tuesday, February 15.

Many Uptown residents have been waiting (some of us 20+ years!) for Clark to transform to a more neighborhood friendly mix of retail and residential, and we are on the cusp of something big. The influx of residents will ideally drive more business to existing retailers and restaurants and make the strip more appealing to other businesses, ultimately benefitting residents across Uptown.

If you want to share your vision for how to best encourage future retail and residential growth on Clark Street, please take the survey, add comments to the interactive map or participate in the community workshop.