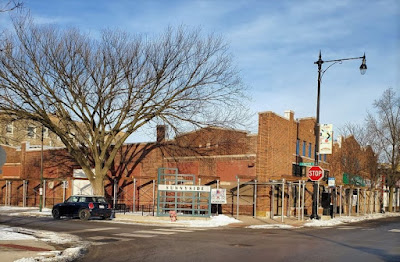 The revitalization of Clark Street continues as a multi-address one story retail building is set to be reborn as residential.
We first learned of the plans in early 2021 and saw basic architectural documents. We then watched interior demo take place in the summer. Although there has been no clear progress since then, the building permitting process takes time and we are beginning to see the process play out.
Plans are detailed in building permits filed for the building, which is on the NW corner of Clark & Sunnyside and has access on both streets. The official address for the development is 4504 N. Clark, and plans show a building spanning approximately 120 feet on Clark with four stories above. The location has been partially empty for over 5 years and is also the recent former home of Fox Village, now relocated to 4625 N. Clark.
According to building permit applications, we can confirm the first story retail facade will remain with 23 ground floor parking spaces and an additional 4 stories of residential containing 12 condo units and balconies added above. We can't release architectural plans yet, but the office of Jonathan Splitt Architects is the architect of record and Raftery Construction is the developer.  Splitt, as loyal readers will recall, is the architectural firm that handled the Eagles Building rehab on Sheridan and Broadway.

Scaffolding has been erected around the vintage building and the windows are now boarded up in anticipation of construction. Depending on when the remaining permits are issued, we expect completion as early as mid-2022 to early 2023.

This continues the renaissance of Clark Street, which has seen developments at 4410 N. Clark, 4511-23 N. Clark, 4533 N. Clark, 4537-53 N. Clark (pending) and 4641 N. Clark, with more yet to come. These developments will revitalize the strip and add needed housing density as well as much-needed modern retail spaces. We also are watching nearby buildings at 4502 N. Beacon (almost complete), 4630 N. Malden (about to start) and 1351 W. Wilson (pending zoning review), all of which will provide a huge boost to the area and replace empty lots. It's a good time to be in Uptown.