If we only had a nickel for each of the messages we've received on the Double Door since we broke news in December 2018 that the iconic club/music venue was reopening in Uptown, we'd be pretty rich by now!

There has been intermittent interior work over the last year, but courtesy Urbanize Chicago, we now can share that the rehab plan for the Double Door was finally approved by the Commission on Chicago Landmarks, which means rehabilitation and construction can start in earnest. 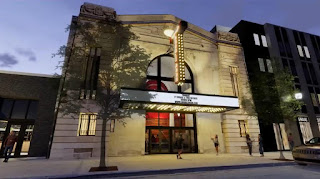 Some of the details here were known, and others only emerged as the proposal moved through Landmarks. We warned back in July 2021 that things might take time, and nearly a year and a half later, here we are.

The building is the former Wilson Avenue Theater, which opened in 1909 and became a bank in 1919. The location housed various banks for close to 100 years, and has been empty as the Double Door's owners have negotiated the permitting process. The building sits in the Uptown Square Historic District and was subject to review by the landmarks division.

Plans (photos above and below, details at the Urbanize link above) show a restored front facade and entrance, with significant rehabilitation being done of the original details along with new windows, a reworked Double Door sign that pays homage to the original*, and a marquee canopy in front.

While you're here, check out great photos of the old theater and bank at the Cinema Treasures "Wilson Avenue Theater" link as well. 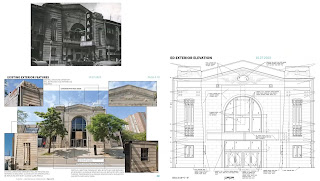 It's been a long time, but this plan looks amazing and will be a great addition to the gorgeous new streetwall on the north side of Wilson between Kenmore and Broadway.

*We are aware that the original sign is in good hands and remain optimistic that it will play a role in the new theater.