From the City Council today: 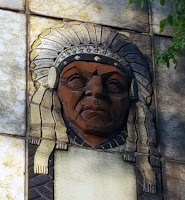 "Forty two structures clustered around Lawrence Avenue and Broadway in Uptown were approved as an official Chicago Landmark District by City Council today.

Characterized by highly stylized, mixed-use buildings and performance spaces, the Uptown Square District is considered one of the best-surviving commercial and entertainment districts developed in Chicago in the early part of the 20th century, according to the Commission on Chicago Landmarks, which recommended the designation in October.

Most of the contributing structures are clad or detailed in terra cotta, ranging from red and buff matte finishes to multi colored enamel and glazes in Art Deco, Venetian Gothic and Spanish Baroque Revival architectural styles. Their architects include Marshall and Fox, Rapp and Rapp, John Eberson, J.E.O. Pridemore, Walter Ahlschlager, Huszagh and Hill, and others.

The landmark designation will protect the exterior elevations of contributing buildings from significant alteration or demolition."