Double Your Pleasure, Double Your Fun: Plans Firm Up For Double Door 2.0 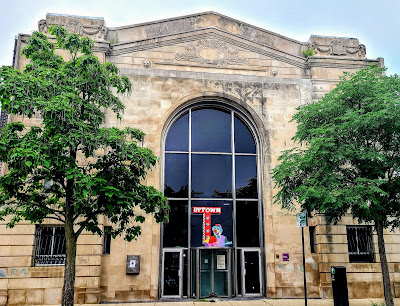 It's happening! A long-empty TCF Bank branch has begun its transformation into the reincarnation of the Double Door.

According to an article in The Columbia Chronicle, Double Door owner Sean Mulroney has bought the building at 1050 West Wilson, and hopes to open it by late autumn.

Uptown Update broke the news in December 2018 that the legendary Wicker Park club planned to move to Uptown, but a series of roadblocks (including the pandemic) delayed it from becoming a quick reality.

However, workers have been going in and out of the building for several months, emptying out the space, and are preparing it to become a two-level club, with the main stage on the first floor and a more intimate performance area with a coffee-house vibe, featuring smaller acts, in the building's basement.

(As with most projects, obstacles and red tape always crop up, so don't be disappointed if the fall opening gets delayed.)

The Wilson Avenue Theater opened at the location in 1909, featuring musical and vaudeville acts. It closed in 1919, making way for the "bank century," with Fidelity Bank, Uptown State Bank, Federal Trust and Savings Bank, Bank of Chicago, and then TCF using the building (and installing a bitchin' bank vault, which will remain a feature of the Double Door). With the arrival of the new club, the theater comes full circle, back to its entertainment roots.

You can read more about the move at The Columbia Chronicle, and see photos of the space (renovation in progress) at 101 WKQX's Facebook page.

What a transformation for corner of Wilson and Broadway over the past few years, with a renovated Gerber Building, a new state-of-the-art Wilson L station, Lucy's in the McJunkin Building, a brand new 11-story building going up at 4601 Broadway, and now the restoration of one of Chicago's legendary rock clubs.