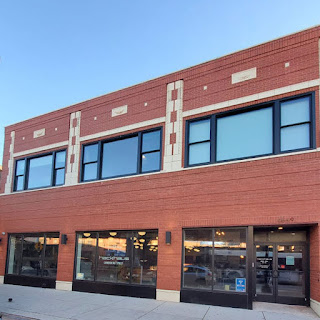 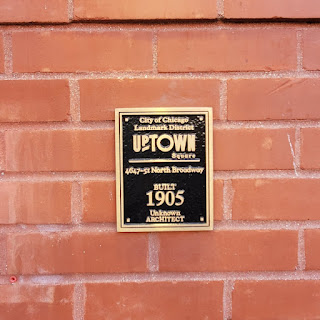 The modest two-story commercial structure dates to 1905 and represents a typical retail property constructed in North Side commercial districts during the first two decades of the 20th century.

The work removed several incompatible alterations to the storefront and replaced them with new bricks to match the historic in size, color and texture. Terra cotta window surrounds were also retained, cleaned and repaired.

The unveiling and rehabilitation of the historic façade has breathed new life into a previously overlooked building within the Uptown Square landmark district."

The Uptown Square Landmark District was created in 2016 at the request of Ald. Cappleman, and protects approximately 42 vintage buildings in the area surrounding Lawrence and Broadway from demolition and incompatible renovations.
We are so grateful for property owners who are willing to retrofit their Uptown buildings to recreate the vintage beauty that was lost over the decades since Uptown's architectural heyday. To mention just a few: the Uptown Broadway Building; the Bridgeview Bank Building; the building north of the Riviera; the "flatiron" building at Broadway and Racine; and now 4649 Broadway.
We've been keeping an eye on 4649 North Broadway and its evolving exterior for a while now:
Congratulations to TAG Capital LLC for earning well-deserved recognition of its historic renovation!
By Kate Uptown - November 02, 2021