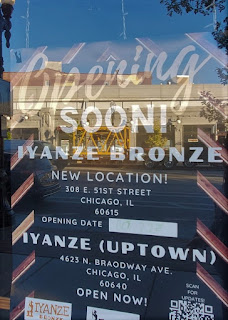 Iyanze has opened a new South Side branch, Iyanze Bronze.

Iyanze opened in Uptown in 2009 and has been chosen to represent our community at Taste of Chicago several times. Now its Nigerian cuisine is also available 12 miles south of Uptown, with the second site officially open on October 22nd after a long soft rollout. Its address is 308 East 51st Street.

The new restaurant is part of a community initiative called Bronzeville Cookin' -- which describes itself as "four distinctive, locally-owned and operated restaurants to a turn-of-the century building in the heart of the historic Bronzeville community. Each of the venues will highlight a different aspect of black cuisine, one of the world’s richest."

Both the Bronzeville and Uptown locations are currently hiring restaurant personnel.

We wish the owners much success in Iyanze's new location.