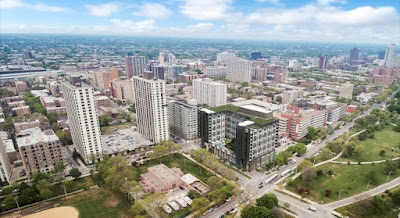 With the City Council voting approval at its meeting today, the lightly-used Weiss Hospital parking lot at Wilson and Marine will become the site of a new residential development.

The profits from the sale of the large lot will enable the hospital to continue its necessary and innovative services to the residents of Uptown and the surrounding communities, as well as finance and ensure permanent housing for homeless women with a $3.1 million contribution to Sarah's Circle.

Sarah's Circle, whose motto is "Ending Homelessness For Women," is currently planning a third facility just a few blocks away from the hospital at Lakeside and Sheridan, in the same block club area as Weiss Hospital (Lakeside Area Neighbors Association). That is where the $3.1 million contribution will go.

Weiss prepared for the loss of the parking lot by recently upgrading its parking structure on Clarendon, expanding parking capacity, making the structure operate more efficiently, and creating higher profits for the hospital.

As regular readers know, the development of the parking lot was supported by many in the neighborhood, but opposed by some of Uptown's loudest and most persistent voices, who oppose new market-rate housing at any cost. Critics cited a nonexistent threat to the future of Weiss Hospital and "gentrification" as reasons to oppose the development.

Scaremongering about Weiss's supposed closure flies in the face of its stated commitment to the community, and the large sums of money that its owner has invested into the hospital in the past couple years to make its services more unique and more cutting edge. As Weiss's CEO, Irene Dumanis, stated in an open letter to the community last month:

"Weiss Memorial Hospital has a proud history in this North Side community, and we’re committed to building on that legacy in the years to come. [...]

Our parent company Pipeline has made over $40 million in investments over the last two years, including

That doesn’t count the millions invested in system upgrades for telemetry, new imaging and radiology equipment and other facility upgrades.

Weiss is also continuing to bring on more physicians and staff, including a new Women's Health Program that opened in 2020, and a breast surgeon who joined the new program just this month.

We are already the largest employer in the Uptown area, with over 700 employees, and we anticipate we will continue to hire more physicians and staff to support our growth."

You can read the full letter here.

Despite personally lobbying local residents, block clubs, and aldermen across the city, opponents failed to stop the development at any of the critical stages. After a controversial run through the local 46th Ward Zoning and Development Committee, the development comfortably cleared the City's Plan Committee, the Zoning Committee, and today, the full City Council.

In committee hearings, aldermen in surrounding communities confirmed Weiss's value to their constituents and probed deeply into the hospital's continued viability. Ald. Osterman voted in favor of the development, joining Ald. Cappleman.

Now that this new 12-story gateway to Uptown's center is greenlit and will be built, we will see capital improvements to Weiss Hospital and a third Sarah's Circle building serving its clientele by providing residences for numerous at-risk women who would otherwise have nowhere else to go.

Another great day for Uptown's future.