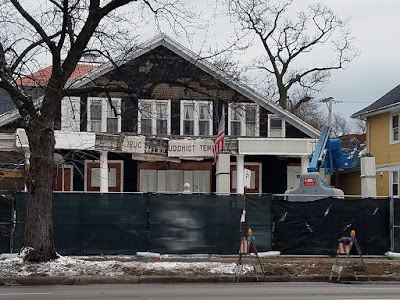 About two and a half years after the owners of the building at Wilson and Ashland put it up for sale, demolition has begun. The front yard is full of heavy equipment, and the butter-colored siding has been mostly removed. A permit for new construction was issued in November 2019.

[A reader tells us that the mid-December wind storm was unkind to the building and exacerbated the deterioration seen above.]

The building, which was previously a private social club, and later the Paul Revere Masonic Lodge, was built between 1880 and 1885.  It was most recently the Truc Lam Buddhist Temple. The order of monks bought it in 2006 and put it on the market in mid-2017.

The temple has since relocated to Elmwood Park.

In 2017, a plan was proposed for a 12-unit courtyard building of two- and three-bedroom condos to go on the site, but Ald. Pawar (47th Ward) denied the necessary zoning change after hearing neighbors' objections, and the sale fell through.

In 2019, a new purchaser bought the property and announced plans for a two-story, 14-classroom daycare/pre-school, which did not require a zoning change. 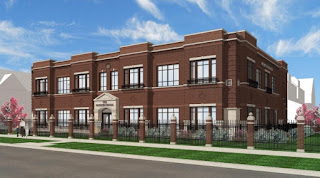