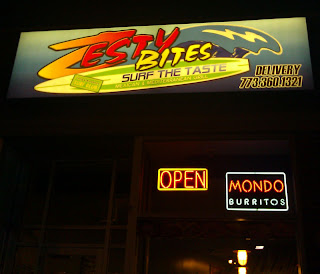 Looks like Taco Del Mar's first foray into the Chicago market has ended, as the only franchise in Illinois, at 3955 N Broadway, appears to have closed  in July.  If you've got a taste for fish tacos, you'll have to drive to Michigan or Ohio.

A reader sent in this photo of the new restaurant that has taken over its space:  Zesty Bites / Surf the Taste.  According to its Facebook page, the menu is Mediterranean and Mexican, and it's open until 5am.