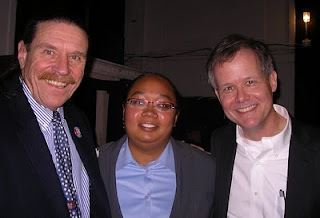 CHICAGO – All 11 candidates in the free-for-all that is the 46th Ward contest to succeed retiring Ald. Helen Shiller spoke Jan. 17 at a well attended community forum sponsored by Buena Park Neighbors at the National Pastime Theater.

The crowded field in the Feb. 22 city election includes two gay candidates, James Cappleman and Don Nowotny, as well as lesbian candidate Emily Stewart, who would be the first openly lesbian member of the Chicago City Council. The ward, which takes in Uptown, Buena Park, Gill Park and part of Lake View, has one of the highest percentages of LGBT residents in the country.

But it's also been plagued with violent crime in some blocks in recent years, as well as vacant storefronts along some commercial strips, and those topics were among the most discussed by the candidates. Continue Reading
By Uptown Updater - January 19, 2011