You might recall the shooting that took place recently at an Edgewater White Castle. The perp, Uptown's own Wilbur Jackson of the 4400 block of North Magnolia, was apprehended. He is featured in the Sun-Times "Mugshots in the News." 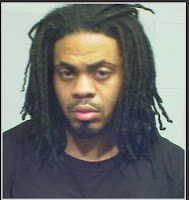 Update:  But, wait, there's more!  Wilbur's alleged accomplice in the White Castle shooting was Uptowner Paul Myvett, who's been creating headlines around here for quite a few years (just ask the people who live near the Sunnyside Mall).  Paul was charged with one count of aggravated battery with a firearm in a shooting and with driving with a suspended license and issued three traffic citations.  He is currently on trial for a previous count of aggravated DUI.

Oddly, Paul is a man of many addresses.  In the DUI case, he gave an Evanston address; in the White Castle arrest, he gives an address on Sedgwick; and a friend with an interest in public records tells us that he recently lost his property virginity when he became a homeowner on Throop on the South Side.  All this without holding down a job.  We wonder what his income source is?
By Uptown Updater - December 06, 2010