420 Festival Cancelled As Buildings Go Up In Smoke

Saturday, April 23rd, was supposed to be a celebration of all things cannabis, with the Waldos Forever Fest taking place on Clark Street between 10am and 9pm. There was going to be music, beer, food trucks, and vendors, sponsored by Dispensary 33, among others.

But none of that will be happening today.

Shortly after 5:30 this morning, a fire broke out in a building on the west side of Clark, at Argyle. That intersection was exactly where the Waldos main stage was supposed to be.

Instead, at least three buildings were engulfed by flames from 5000 to 5006 Clark. Two auto-related businesses suffered heavy damages: Star Auto and Smashy Automotive. Residents were evacuated from some nearby buildings, and there's a report of one person being taken to Weiss Hospital with non-life-threatening injuries.

Thick black smoke could be seen for miles, and sirens were heard for at least a half hour as firefighters from surrounding districts came to assist in fighting the fire. Some nearby residents lost electrical power for a brief time, and the CFD had to ask for water pressure to be increased, because they were using so much water to put out the flames.

This morning we heard from the folks at Two Bears management, saying:

The SoFo Tap and Meeting House Tavern are closed for the day.  We hope to open at 8pm pending fire crew’s work and the demolition requirements. 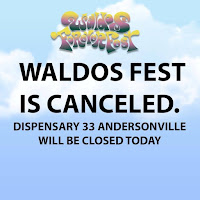 What was supposed to be a celebratory day has become a sad one. Besides the person who suffered injuries, we are thinking of the three very good, stable small businesses that may never open again and their employees, who are now out of jobs for the foreseeable future.

We are thinking of the many hours people spent putting together the Waldos Forever Festival, determined to make it fun after Covid cancellations.

We don't know if there was smoke damage to immediately adjacent businesses, like Dispensary 33 and Orangetheory Fitness (call any business in the area to make sure they're open before stopping by). It's just a no-good rotten thing to happen to so many people.

From a preservationist standpoint, seeing the gorgeous much-loved vintage terra cotta ornamentation at 5006 become smoke-charred is painful.
And adding insult to injury, we'd been hearing whispers that a successful entertainment-based restaurant was negotiating to move into one of the buildings and rehabbing it... well, quite a more extensive rehab is needed now.

We're glad no one died or was injured worse than what happened. But there's really no good upside to any of this morning's news.

At 9am, CFD tweeted: "3-11 struck out, companies chasing hot spots, main body of fire is out."