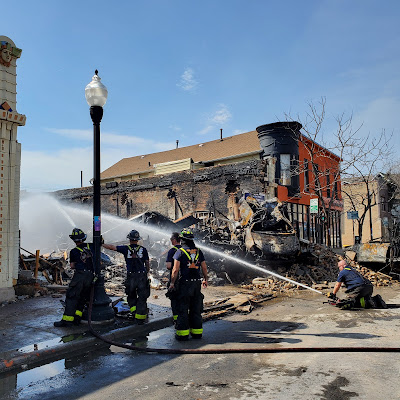 We covered the unfortunate destruction of two longstanding Uptown businesses, Star Auto and Smashy Automotive, over the weekend.

After a fire started at the rear of Star Auto, the Chicago Fire Department responded nearly immediately but were unable to stop flames from moving to the adjacent building at 5006 N. Clark ("Smashy Automotive"). One man was pulled from the fire alive by staff preparing for the Waldos Forever Festival.

As news of the fire spread on social media, many shared photographs of the ornate facade at 5006 N Clark, built in 1919 as the Argyle-Clark Garage. Everyone was hopeful the beautiful terra cotta façade could be saved, but around 2pm, the Fire Department decided that the façade needed to come down to control the fire.

We heard from multiple sources that the facade was coming down, and learned that staff from Preservation Chicago were on site as soon as possible to try to save elements of the building. People messaged us that the demolition crew knocked large portions of the façade down without regard to the terracotta, and it appeared the three ornate faces and two "wheels" on the façade were lost.

But then a tweet appeared showing the center face from the façade laying on the ground. We started asking around about what happened to the face, and that led to more inquiries about the faces on the side, which survived the initial demolition, but were gone by the evening.

We got several answers, including witnesses who told us the center face was put on a truck, but had no definitive information until the owners of SoFo Tap sent the below picture, showing the three faces safe and sound on a flatbed truck from McDonagh, the demolition contractor brought in by the City of Chicago.

Preservation Chicago then emailed separately, telling us that the "wheels" and numerous other decorative elements were recovered by staff and set aside for safe keeping. 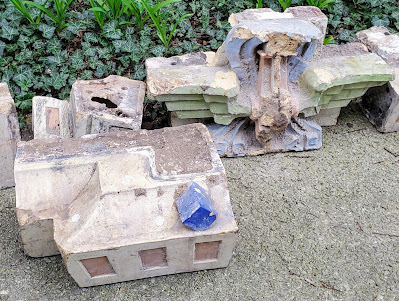 It's great news that the faces, wheels and decorative elements are preserved and can be restored or recreated.

5006 N. Clark was for sale last year and then off the market several months ago. We received a tip that Surge Billiards was the purchasor and planned to rehab the building for its latest location, but held off on running the story since the sale was not final.

We learned last night that Surge plans to go through with the purchase, despite the loss of the building. Our source tells us that Surge is committed to rebuilding on site and would like to restore elements of the old building, reusing the faces, wheels, and other decorative terra cotta, if possible.

So, this is a sad story with a potential great end for the citizens of Uptown and Andersonville.

There were multiple heroes on the day, including the staff of Dispensary 33 and the Waldos Forever Festival who saved the man's life, the Chicago Fire Department for controlling and extinguishing the huge fire, McDonagh Demolition for recognizing and saving the critical decorative elements of the facade, and Preservation Chicago for acting quickly to save additional elements of the facade from heading to landfill.

We very much look forward to Surge opening on this spot, which will return to a restaurant/bar use for the first time since the early 1990's, and we hope Surge, McDonagh, and Preservation Chicago will work together to save another piece of Uptown's history.