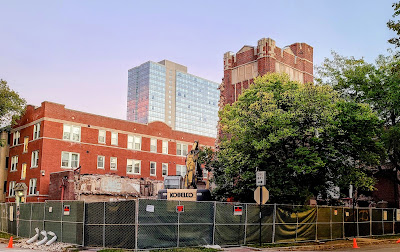 It's the final days for the church building at 4447 North Hazel, which has been largely demolished as of Thursday evening.

The Assyrian Evangelical United Church of Christ moved out a year ago, leaving the building empty, and has sold the property to a developer, which will build a 32-unit, five-story residential rental building at the site. You can see the plans for the new building here.

While it's always sad to see a neighborhood landmark go, it must be remembered that the building is over a century old with severe maintenance issues, and a limited income with which to make structural repairs. The church board made the decision to sell.

We don't know exactly when the church was built, but we know it's at least 102 years old. In looking through the Tribune's archives, we see that the building was home to the Sheridan Road Methodist Episcopal Church by 1919. In 1922, it ran a notice seeking amateur musicians of "either sex, under 30" for a "high class orchestra." 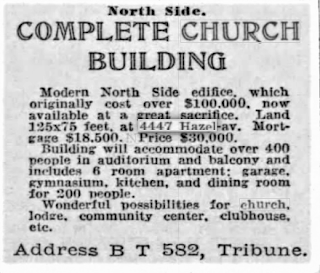 The Assyrian Congregational Church then purchased and moved into the building. It was founded and led by Rev. Paul Newey and Mary Newey, both born in Iran, who helped more than 1,000 Assyrians become American citizens following World War II.

In 1959, the famous pastor and radio evangelist Preston Bradley spoke there to celebrate the church's 40th anniversary. In late 1965/early 1966, it changed its name to the Assyrian Evangelical United Church of Christ.

The church has relocated to Niles, according to Block Club Chicago, where many of its parishioners live.