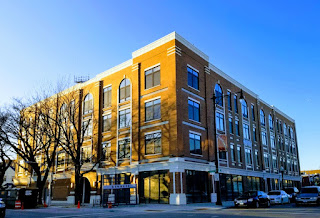 On March 10, 2009, a fire gutted a body shop that was located at the corner of Ainslie and Clark.

By early April, the rubble had been removed and the lot was empty.

It remained that way for nearly a decade, until a plan was presented to build a mixed-use residential rental building on the site.

The local block club, Winona Foster Carmen Winnemac BC, rejected a 60-unit six-story building at the site, but worked with the developer on a 54-unit four-story building in 2017, which it approved.

Presenting "The Ainslie," which welcomed its first tenants earlier this month.

For more on the building and its amenities, click here.