Many changes have taken place on Clark Street between Montrose and Lawrence over the last 10 years. The busy wholesale retail community that was once a staple of the 4500 and 4600 blocks is merely a shell of its former self, and there are vacant storefronts and blocks that suffer from little to no foot traffic.

Carol's Pub, Tiztal Cafe, Munno, and My Buddy's are wonderful neighbors and have contributed greatly to the vibe and sense of community.  But these and other Clark Street businesses rely on density and residents of the area visiting their establishments.

We have suggested before that our neighbors on Clark Street need a voice in what takes place on this street. Decisions have historically been made by the neighboring block club, Dover Street Neighbors Association, which does not count Clark in its official boundaries, but controls zoning decisions on Clark because of a shared alley.

It seems that someone is finally working to organize Clark Street residents to create a new block club.  The flyer pictured below recently appeared on Clark Street buildings, and we applaud the active neighbors behind the effort. 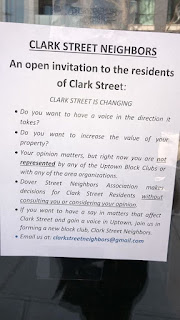 If you can't read the text, it says:

Your opinion matters, but right now you are not represented by any of the Uptown Block Clubs or with any of the area organizations.

Dover Street Neighbors Association makes decisions for Clark Street residents without consulting you or your opinion.

If you want to have a say in matters that affect Clark Street and gain a voice in Uptown, join us in forming a new block club, Clark Street Neighbors.

Since the new block club is in the development stages, we urge all neighbors living on the 4400-4700 blocks of Clark, as well as businesses, to respond to the call on the flyer. Engage your neighbors and take ownership of this stretch of Clark! Businesses need residents, and residents need businesses.

If we truly desire this section of Clark Street to become as vibrant as its counterpart to the north in Andersonville, we need more residents and fewer one-story vacant storefronts.  If development proposals are continually stymied by those who don't live on the street, we all will suffer in the long term.

The new Clark Street Neighbors block club can be reached at clarkstreetneighbors [at] gmail.com. Get involved! Help bring the retail you desire to your street!
By Uptown Updater - February 24, 2020