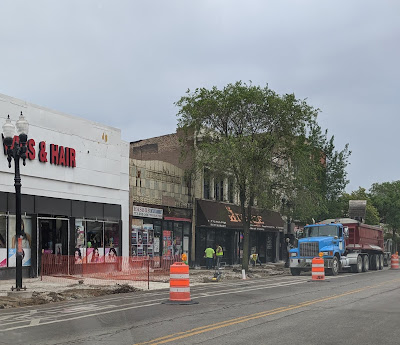 Good-bye, 1970s-era gravel-accent sidewalks! The last phase of the Broadway streetscape project has begun, between Wilson and Leland.

The first phase saw Uptown get a new community plaza in front of the Riv, and new sidewalks, new lighting, curb-to-curb street resurfacing, additional community identifiers, and new crosswalks in the section between Leland and Gunnison, and on Lawrence between Broadway and the Red Line entrance too.

(And may we reiterate how good it is not to have the foot-tall curbs along Lawrence anymore, and the scary-as-hell sidewalk incline at Clifton and Lawrence? That was some evil, evil infrastructure.)

The 4600 Broadway block had to wait until the construction of the Wilson L was complete, but Phase 2 is now underway, with some of the sidewalks already in the process of being removed.

We've seen a lot of changes in Uptown since this blog started back in 2007, and the improving face of Broadway is one of the most significant.
By Sonny Side Up - June 12, 2019