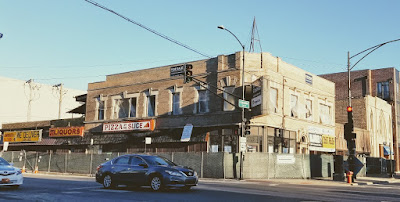 The green construction site fencing is up, and that means changes are on the horizon.

In February, CedarSt/FLATS acquired the properties on the southeast corner of Foster and Broadway, at Uptown's northernmost boundary. Best known as "the Laurie's Pizza corner," the buildings had been for sale since 2015.

CedarSt announced plans to demolish the existing retail buildings from Broadway to the alley east, and from Foster south to (but not including) the church at 5145 North Broadway. In its place will go a mixed-use, 27-unit TOD apartment building with 6,000 square feet of ground floor retail and a roof deck. Future tenants will have access to the amenities at the larger FLATS building currently under construction down the street, The Draper, at 5050 Broadway.

Laurie's Pizza, the former flagship business at that corner, permanently closed in June 2012 after a 13-year-old boy who was eating inside with his family was shot and killed by a rival gang member during the Memorial Day weekend.

Laurie's had been an institution at that location for decades (maybe 50 years?) and at one point there were a liquor store, a hot dog stand, and a sitdown restaurant on-site. Unfortunately, it had gone downhill in the years before the murder and for several years prior, it had been the site of gang violence. Although many Uptowners hold fond memories of the place in its glory days, it hadn't lived up to that standard for quite a while. It has been closed since the night of murder, nearly seven years ago.

The other businesses at the site have all relocated: