Don't Mind The Plywood -- Jake's Is Open For Business 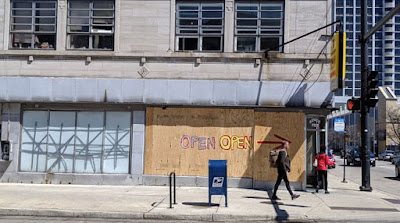 Jake's Pup in the Ruf, the legendary Uptown greasy spoon at Sheridan and Montrose, is famous for its windows. Remember, "Only a rooster can get a better piece of chicken than Jake's"!

So someone went low and nasty last week when they went after Jake's windows, shattering the ones on the Sheridan side of the store.

The rumor mill went into full gear, and we've been asking around to see what happened. Here's what we've heard from several sources:

An intoxicated customer became irate with one of Jake's employees. They argued. The intoxicated customer expressed his displeasure by taking a baseball bat and knocking out the full-length windows on the Sheridan side, as well as the glass door. (That brings back memories of another long-time Uptown character, George "Batman" Atkins. He didn't do this, though.)

As you can see, Jake's is boarded up and fully operational again. One of the people we spoke to said that during her visit, "The staff seemed to be in good spirits and their dining room was full."

So if you haven't been there and want to support them, stop on by. They open at 5:30am. They've been a part of the fabric of Uptown life for 60 years now. 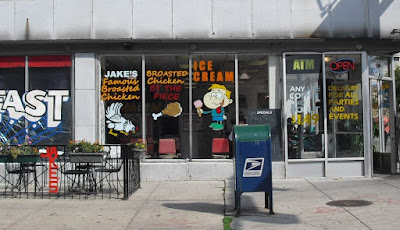 Have some crinkle fries, a greasy breakfast, and/or one of their famous 49¢ soft serve cones. Leave a couple quarters or a buck in the tip jar. Stopping by Jake's is what Uptowners have done for generations. In fact, the second generation of the Jake's family now runs it.

Or join the Buena Park Wine Walk on April 28th, and make sure you fill your wine glass at Jake's, which is a participant in the event. Just because they've been here forever doesn't mean they aren't keeping up with the times.

At the very least, take a moment to enjoy the window graphics on the Montrose side, which remain untouched, as you make your way to the Satellite Cafe (942 Montrose) or Ross Dress For Less (918 Montrose).