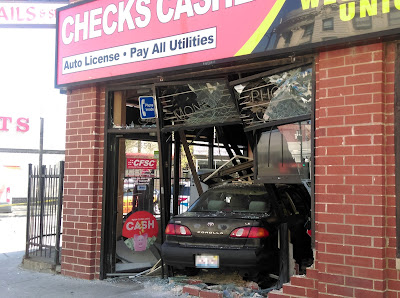 Around 6:30 this morning the Currency Exchange at Wilson and Broadway became a drive-though.

According to Ald. Cappleman, "A car did a u-turn at the intersection of Broadway and Wilson and hit this car that was traveling southbound on Broadway. This car spun around and went into this building."

The business wasn't open yet, so no one inside was hurt. CBS Chicago says the driver was taken to Weiss Hospital. No word on his or her condition yet.

Thankfully the car went through the glass doors and not the brick wall, although that's going to be quite a clean-up job.

There's another currency exchange at the intersection of Broadway, Montrose, and Sheridan if you need its services. This one may be out of commission for a bit.