A Visit To Tesfa Ethiopian Cuisine 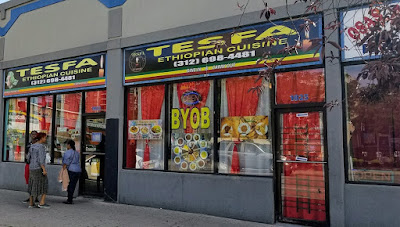 If you'd like to try a new restaurant that's a little off the beaten path, we suggest you make your way to Tesfa Ethiopian Cuisine, at 1023 West Wilson, across the street from Sonic. We tried it for the first time this week. Our only regret is that we didn't bring wine to this BYOB storefront restaurant. *More about this later. 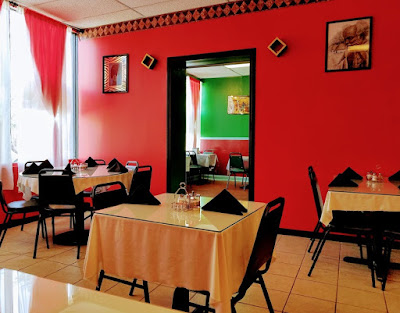 Tesfa is owned by an Uptown-based family. They came here from a small village in Southern Ethiopia, near the Kenyan border, where they were forced to move frequently due to drought, war, and tribal conflicts. They eventually made their way to Chicago, and Uptown. The word "tesfa" means "hope" -- they explained that they always hold out hope that they are making their community better through their presence and that they are providing a safe and happy gathering place for neighbors and customers. 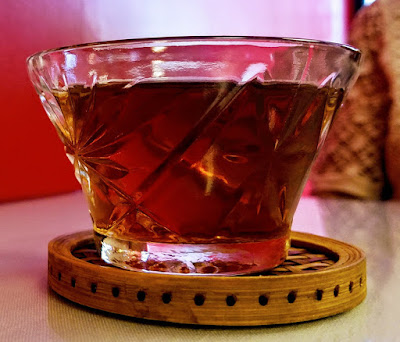 Tesfa is open seven days a week, and serves breakfast, lunch and dinner. In addition, they hold tasting events, such as those for different types of Kenyan and Ethiopian coffee. When we first sat down, they brought out complimentary cups of delicately spiced tea, their mother's private blend. 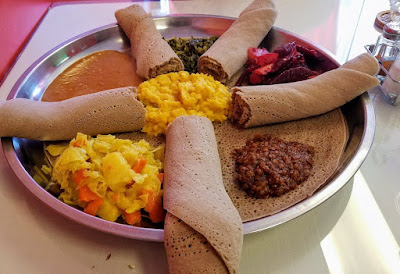 The appetizers and entrees were delicious. We each ordered an entree consisting of three items ($10 per entree), which came combined on a tray for us to share, with plenty of injera (Ethiopian flatbread) to scoop up the food. Some parts of the meal were spicy, and some weren't at all. The spicier portions had us wishing for a nice bottle of wine to help wash them down.

There are vegetarian and meat entrees, and the description of the desserts made us decide to stop by some day soon for an "afternoon tea" of African coffee and sweets. The service was warm, attentive, and helpful.

*About the wine: Tesfa and Provisions Uptown have formed a partnership. Get your BYOB bottle at Provisions to bring to Tesfa and take 10% off.

Check out Tesfa on Yelp, Facebook, and GrubHub. Or give them a try at the upcoming Taste of Uptown on Wednesday. We very much enjoyed our first visit, and we'll be back.
By Kate Uptown - September 22, 2017