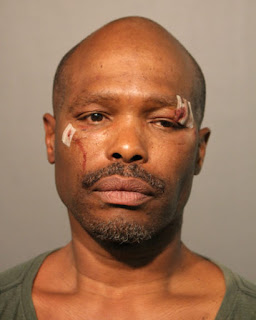 Wednesday night on the 1000 block of Wilson, a man allegedly was seen by 19th District tactical officers committing a strong-arm robbery against a 22-year-old female. He was observed, police say, holding the woman at knifepoint gunpoint and demanding she turn over her valuables to him.

The officers approached, and the man -- Darnell Lamont Murphy, age 52, of Bucktown -- resisted arrest, and tried to disarm one of the officers, according to the news release put out by CPD.

A foot chase ensued, and Mr. Murphy was arrested and taken into custody on the 4700 block of Winthrop at 12:05am Thursday.

He will appear in bond court at 26th & Cal Friday morning. He is charged with:
Seriously, people from Bucktown are coming to Uptown to commit crimes? Is it Backward Day?

Update: From Tom Tunney's newsletter:  "... occurred at 1040 W. Wilson in the early morning hours of October 20th, 2016.  It is important to know that the offender is a convicted felon on parole with an extensive violent history.  He was convicted of murder, robbery and burglary in a case in 1992 and was sentenced to 33 years.  He was released on parole and was arrested again in 2012, convicted of that burglary in 2014, and sentenced to 8 years.