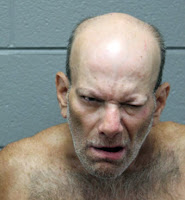 The 58-year-old homeless man who was charged with the murder of another man in the bus shelter in front of Target last year has been found unfit to stand trial.

Ross Feiwell was charged with stabbing 49-year-old Thomas Sawyer in the neck with a box cutter, killing him, on June 14, 2015, after the two men argued.  According to court testimony, Mr. Sawyer approached Mr. Ross, who was setting up his belongings for the night in the bus shelter.

The two men argued, and then the fight turned physical. Mr. Feiwell apparently considered the bus shelter to be his personal property and is said to have told the police that the motive for the attack was, "I was protecting my house. He was going to piss in my house."

According to the Sun-Times:


At his bond hearing last year, Feiwell said the “Illuminati” are after him and wanted a Rabbi to help him. “I will be judged by a higher power,” Feiwell told the judge.

He also spoke of Anita Hill and Kathy Bates’ performances in the film Misery; and accused an assistant public defender of being the devil and a member of the Illuminati.

He was found guilty of attempted murder in 1986, after he went after a house guest with an axe.

After the judge found him unfit for trial, he was given over to the custody of the Illinois Department of Human Services, where we hope he will receive the care he needs, and that he is never in a position to harm anyone again.
By Kate Uptown - June 09, 2016