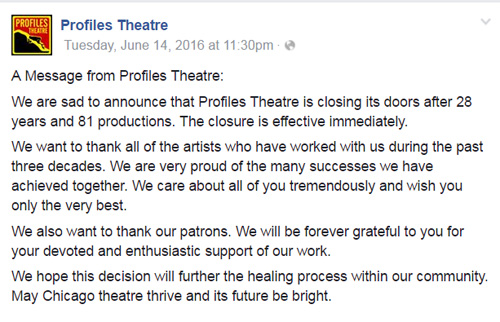 Less than a week after a series of Chicago Reader articles alleged that sexual, psychological, and physical abuse regularly occurred behind the scenes and on-stage at Profiles Theatre, Profiles announced on its Facebook page tonight that it is closing, immediately and permanently.

We usually don't like to see Uptown businesses go belly-up, but the pattern of behavior by the two artistic directors and the "non-apology apology" issued by one of them last Friday made it impossible to see any other end to this saga.

Of the 500 or so Facebook responses to the statement released by Darrell W. Cox, the only ones in support of the theater came from a quickly-deleted fake account that used the name and photo of an actress who had no idea her persona was being used to defend the theater's actions against accusers. A common hashtag in the responses was #deleteyourtheater.

Congratulations to Christopher Piatt (founder and performer in Paper Machete) and Aimee Levitt for a well-researched and powerful series of investigative articles.
By Kate Uptown - June 15, 2016