An Argument Leads To A "Self-Inflicted" Hallway Shooting 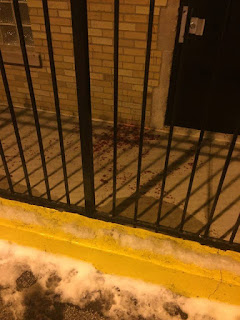 Crazy goings-on tonight on the 800 block of Ainslie, near Marine Drive. Neighbors report hearing a loud argument and struggle inside a "problem unit" in the building, followed by a gunshot, followed by a fight in the building's hallway. When it was over, a trail of blood led out the door and down the street. Police were called, and what a surprise, the tenant involved in the fight wasn't cooperative.

A follow-up of sorts in the Sun-Times says that a 16-year-old male, an admitted gang member, showed up at Weiss Hospital with a gunshot wound to the hand. Not-a-surprise number 2 of the evening: he wasn't cooperating with the police, either.

Police say that the wound was most likely self-inflicted.

We really hope that the 20th District Police and Ald. Osterman's office put some pressure on the landlord and/or management company about whoever is living in the unit. We're sure the rest of the tenants don't appreciate the possibility of a bullet going through the walls into their homes.

UU Note: From everything we've heard, this is a wonderful complex, and even the residents we spoke to last night about the incident spoke highly about how the place was run. Obviously this one tenant had a guest who caused trouble. This is one unit and one guest -- an isolated incident -- not an indictment of the entire building or the vast majority of the people who live there. We are told that measures are being taken to ensure it doesn't happen again.
By Kate Uptown - February 18, 2016