Going Up! Wilson L Renovation Gets First Glimpse of New Elevator To The Platform 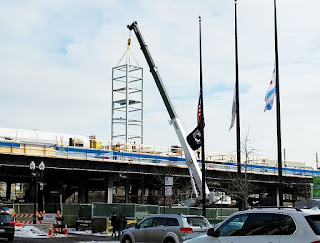 Joy! Finally, one of the most-needed aspects of the new Wilson L station is making an appearance. CTA workers are beginning the first stages of the installation of the elevator that will take passengers from street level to the train platform.

When the elevators are completed, the L will finally be accessible to people with mobility issues, the elderly, and people pushing strollers and wheelchairs. No longer will they be denied access to public transit by long stairways that they are unable to use.

Frankly, we think it's criminal that the CTA -- public transportation -- is not compliant with the ADA at every single station between Sheridan and Thorndale, especially since Uptown and Edgewater have so many handicapped and elderly residents. Wilson is only one station; there are six others in the Edgewater/Uptown corridor that remain non-compliant. (Maybe that will all change in the new "Red Ahead" massive rehab that is being considered.)

But for now, we'll put that on the back burner and be very happy that this much-needed aspect of the station rehabilitation is on the way to becoming a reality.

For the first time in its history, the Wilson station will be accessible to everyone. That's worth celebrating.
Update:  According to Kevin O'Neil at CTA Tattler, the CTA has plans to make all rail stations compliant within 20 years. Currently, 46 stations -- 32 percent of the total rail system -- is non-compliant. Seems odd that nearly every station in Uptown and Edgewater is among that number. So, if you can't climb the stairs at Argyle or Bryn Mawr, just wait 20 years.... or until the "Red Ahead" project gets underway.
By Kate Uptown - January 20, 2016