Shortly after the Saturday night show at the Aragon ended and the crowd started streaming out of the venue, shots rang out in front of the concert hall. According to 20th District Police, a male was shot in the leg and a female's forehead was grazed by a bullet.

Readers report hearing four separate bursts of 8-10 shots. Police and ambulances were on the scene in less than a minute.

It all took place at 2:25am. The show, "College Craze 4: Law Cannon & DJ Hoop Dreams" according to the Aragon's website, had concluded about 15 minutes earlier and hundreds of people were leaving the Aragon at the time.

It's not known whether the people hit were innocent bystanders or intended targets. It's also not known at this time whether the shooting was related to the concert in any way. A reader says, "Word in the street is two vehicles passing through shooting at each other." Another reader says that a suspect car was stopped over on Devon.

Update: One of the managers of the Uptown Lounge, located a few doors west of the Aragon, posted on UU's Facebook page,

"Between 20-25 gun shots at approx. 2:23am from the gang bangers that attended the hip hop show with Lil Durk/ G Herbo at the Aragon Ballroom - gunfire exchanged, SUV crashed into the brick wall of the parking lot just west of the Aragon, shooters jumped out of SUV into another car, bullet casings all over the street (and bullet holes in 2 cars parked on Lawrence in front of Bridgeview Bank), street blocked off from Broadway to parking lot with detectives since they are considering it a crime scene.

This is 100% connected to the concert. This corner has always been a safe haven for the neighborhood and I am disgusted and mad.

Black SUV still at scene (both gold cars in the picture have bullet holes)."

Update: What the promoters suspected would be a volatile crowd (judging by the claim of 80+ security guards on the promotional flyers) was exacerbated when the concert started late. We are told that there were still lines of people waiting to get into the venue two and a half hours after the scheduled start of the show.

Neighbors report various altercations before the concert on the streets surrounding the Aragon.

Update: The Tribune says, "At about 2:30 a.m., two people were shot in Uptown, said Chicago police spokesman Officer Ron Gaines. A 68-year-old man was standing outside and a 34-year-old woman was in a vehicle in the 1100 block of West Lawrence Avenue when they each heard gunfire and realized they had been shot, Gaines said.

The man was shot in the leg and the woman was grazed in the forehead. Both went to Advocate Illinois Masonic Medical Center in good condition. After the shooting, an empty SUV was discovered crashed nearby, Gaines said."

Update: Alderman Cappleman tweeted: "One victim released from hospital. Other one is stable. Pulling camera pod footage to assist with ongoing investigation. ... At this time, believe shooting related to concert." 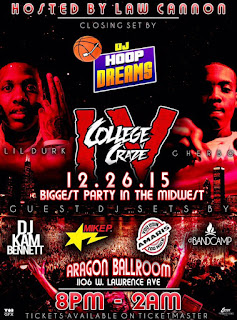 Update: Here's the poster advertising the concert. How did you enjoy the "Biggest Party In The Midwest"?