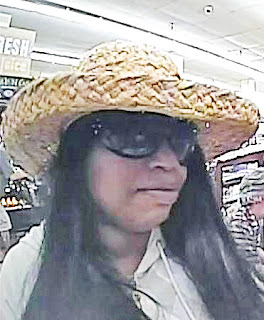 Last week was a bad week for banks at Montrose and Broadway, and August has been a bad month for TCF branches located in lakefront area Jewels.

Sure, you probably know about the tattooed dude who robbed the PNC Bank last week, but now there's a lady who likes sunglasses, big hats, and wigs who hit the TCF branch in the Jewel kittycorner to PNC at 3:07 on Saturday afternoon.

At least this lady must have read Bank Robbery For Dummies, since she's making an attempt to disguise herself. She is described as African-American, 30-40 years old, and 5'3" to 5'5" in height.

She's had a busy August, also robbing the TCF branches in the Jewel stores at Broadway/Addison in Lakeview on August 5th, and at Broadway/Berwyn in Edgewater on August 14th. 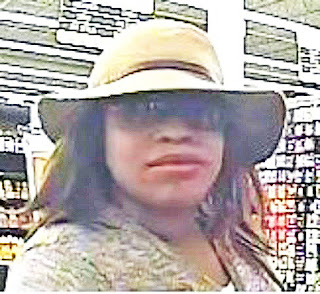 These are getting to be a well-traveled robbery route as of late, with the Shady Lady, the Benchwarmer Bandit, and Gentleman Bandit Kevin Ross all making the rounds of those exact branches in 2013 and 2014. (No cute nickname has been assigned to this lady yet, but if she gets more prolific, we're betting she'll be tagged as the "Floppy Hat Bandit.")*

The FBI is involved, as it is with all bank robberies, and is offering a reward.  If you have any information that can help lead to her arrest, call the feds at (312) 421-6700.