Everything Old Is New Again: Pensacola Place Wants To Build Townhouses On Its Property 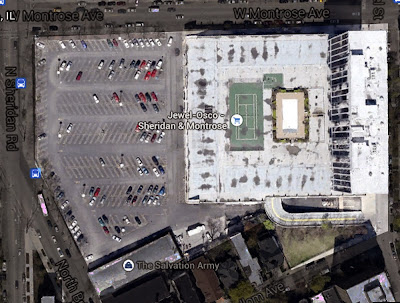 Did you know that when you shop at the Montrose/Broadway Jewel, you're literally underneath tennis courts and a swimming pool?  The residents at Pensacola Place are enjoying summer outdoors, right above your head.

In the future, you may be reaching for milk and weighing apples underneath new townhouses. Readers at Buena Pointe, across the street, are reporting that they've gotten notices informing them that the new owners of Pensacola Place are requesting a zoning change that would allow townhouses to be built on the large flat roof of the retail portion of the property.

It's not a new idea.  Back in 1979, when Pensacola Place was designed by Stanley Tigerman and was on the brink of construction, the Tribune reported, "It will have a large base structure with 100,000 square feet of shopping and room for 250 cars topped by a 13-story tower containing 252 rental units. Forty-five two-story condominium townhouses eventually are to be built on top of the base structure."  Apparently "eventually" took a while to happen, but Waterton Residential, the owner, has the original plans in its sights.

We asked someone who's usually in the know about such matters, and he said, "Keep in mind that the building has a parking ramp that can handle any increase in density (i.e. cars) on the site, which should make the UU readers happy."
By Kate Uptown - August 03, 2015