A New Way To Brown Bag It 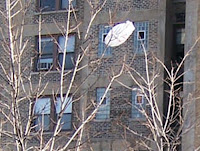 In case you've missed the news, if you're shopping at a big-box store for groceries or goods, you'll need to bring your own bags or buy paper ones.  As of today, small flimsy plastic bags are no longer allowed to be given out by larger stores.  In yesterday's newsletter, Ald. Cappleman says:

"Chicago's greatest natural resource is Lake Michigan, and plastic bags are one of the major sources of pollution. To protect our water and our environment, I was a co-sponsor of an ordinance to ban the use of plastic shopping bags in Chicago. As of Aug. 1, retail stores with more than 10,000 square feet will no longer be allowed to offer plastic bags. In August 2016, smaller chain stores and franchises will be banned from using plastic shopping bags while small independent or non-franchise stores and restaurants will not be affected by this legislation.

In the past, I've expressed concerns about the lack of incentives to encourage Chicago residents to become more environmentally friendly. I would like to see incentives for composting, recycling, and alternative energy uses that shrink our reliance on oil. Although I have been working with environmental groups throughout the city and state, I would love to hear from you! Do you have ideas or examples from other cities and states that would make Chicago more environmentally friendly? As we approach budget season, I would like to incorporate some of these ideas along with reducing waste and inefficiencies in our city.

It's important that we act on this now, both for our sake and for the sake of future generations."
By Kate Uptown - August 01, 2015