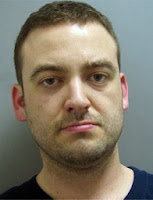 Interesting that so many high-profile crimes in Uptown are committed by people with no connection here.  There was the bank robber from Evanston a couple weeks ago and now the carjacker from Lake County.

A reader pointed out that the carjacking suspect who is the subject of a manhunt started his spree around 11:20am "Friday morning, when he carjacked a driver in the 800 block of West Irving Park Road in Buena Park. He allegedly 'forcibly removed' a driver from a green Dodge Caravan."  (The entire DNAinfo story is here.)  Other reports say the carjacking took place at a gas station, so that would be the BP at the corner of Irving and Broadway.

On Saturday, when police saw the Caravan on the South Side and chased it, Rockie Douglas of Beach Park allegedly took off and hit an SUV, killing an 11-year-old boy.  He has since carjacked two other cars and was last seen driving west on I-88 in a blue Honda Accord.

We feel for all his victims and their families, and hope he's found soon.

UU Note:  Cops advise to always lock your car doors when you're driving.   This guy was armed, so giving up cars to him was a wise move, but having your doors locked keeps people from approaching and throwing you out of your vehicle.
By Kate Uptown - December 23, 2013