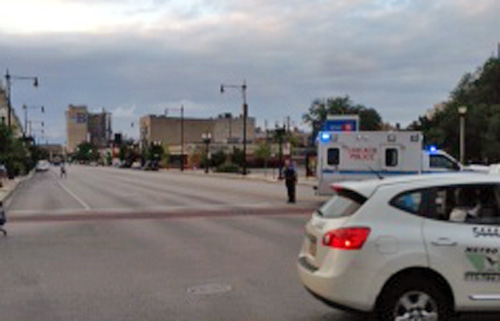 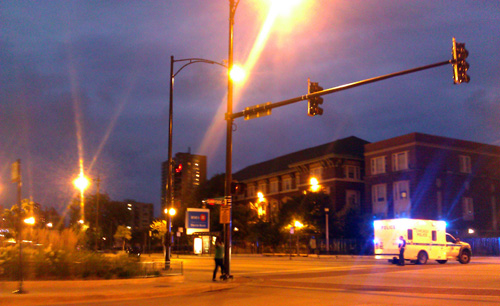 There was a shooting tonight around 6pm at Wilson and Broadway.  As of 7:45pm, the streets are closed off for one block in all directions of the intersection, and there is a heavy police presence.

According to the Tribune, a 14-year-old boy was shot in the head after an altercation between a group of pedestrians.  He is in critical condition.  According to people on the scene, the victim was not involved with gangs and was in Uptown to visit his mother.  In another tweet, Ald. Cappleman said, "Unclear if shooting is gang related but it is suspected for now."  The victim was taken to Illinois Masonic.

Another man in his 20s walked into Weiss Hospital shortly after the shooting with a gunshot wound to his wrist.  Police are investigating whether that injury was related to the same incident.

We'll update as we get more information.  There are news trucks on the scene, so there should be some links going up in addition to the Tribune's story.

Update:  The Sun-Times has a very brief story, notable only in that it gives the age of the victim as 16, not 14.  Hard to get details right in the first hours after an event.  More to come, I'm sure.

Update:  A reader who was on the scene said he heard about eight shots fired.  The shooting(s) took place on the Wilson side of the currency exchange, about twenty feet from Broadway.  The police were on the scene within seconds.

Update:  WGN (link here) just said on its newscast that the police are "insisting" that the young man who was shot was not gang-affiliated.

Update:  CBS2 (no link available right now) just said on its newscast that a semi-automatic weapon was used and no one is in custody.  Police are still on the scene.

Update:   The plot thickens.  ABC7 is saying (link here) that both victims have gang affiliations, but they are unsure if this was a gang conflict.

New comments are not allowed.