The Return Of Lake Lakeside 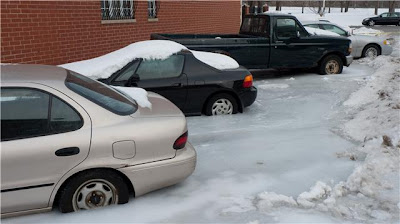 This was the scene four years ago at Clarendon and Lakeside. While there was a major pipe replacement that caused the end of "Lake Lakeside" and its flooding, a reader tells us, "There are cars being entombed in ice as I type this. I just got back from Walgreen's on Marine/Lakeside and there is a fire hydrant open. A trash can is covering it, but the parking lot across from Walgreen's (where cars got trapped in ice a few years ago) is filling up and icing over. There is about an inch of ice on the tires of the cars there right now."