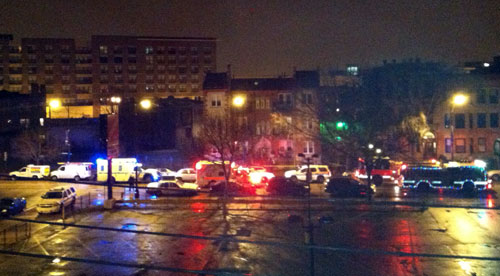 This was the scene at Sheridan and Agatite last night around 2am.

A very sad story is behind the photo:  A woman who had just moved to Uptown, someone who is described by a friend as "an amazing woman" who would never hurt anyone, was brutally attacked in front of her home on the 4400 block of Sheridan Road around 1:40am.  She was robbed, beaten, and sexually assaulted.

The suspect, Jason Gurneau, age 32, is in custody.  He allegedly was riding past on his bike when he saw the victim opening the security gate of her building with a key and attacked her.  Her screams attracted the attention of a neighbor, Tom Schabow.  He called 911 and ran to the woman's defense.  The police arrived quickly, and the suspect tried to escape on his bike.  Mr. Schabow told ABC7 News, "The guy tried taking off on his bike and he was coming in my direction and I just took him down."

Jason Gurneau gave an address on the 1000 block of Lawrence, but per several comments on Uptown Update's Facebook page, "This guy's motives were because he was homeless and 'pissed she had a home and deserved it.'"

Jason Gurneau has been charged with robbery, aggravated battery, aggravated criminal sexual assault and two counts of resisting a police officer.  He is a reported gang member with a history of convictions:  15 months for possession of a controlled substance in 2002; four and half years for burglary in 2004; and four years for aggravated battery with great bodily harm in 2008.  In fact, he's appeared in UU before:  for impersonating a police officer by waving a plastic sheriff's badge in the 1200 block of Wilson in 2009, for which he was sentenced to six months in Stateville.  He gave an address in the 4700 block of Sheridan then.

We have so many feelings about this:  revulsion that a woman going into her own home on a busy street was attacked; empathy; hope that she can somehow have a normal life after this; and admiration and gratitude that there are neighbors like Tom Schabow, who didn't hesitate to go the aid of a stranger in distress.  As horrible as the attack was, it could have been much worse.  Today the victim is alive and recovering in a hospital.  That may not have been the case if someone hadn't been willing to get involved.  The victim is in our prayers.

On our Facebook page, Tom Schabow posted:  "Everyone just be safe and pay attention around you. This guy attacked this woman because she had a house and he didn't.  This neighborhood is flooded with homeless people who are mentally ill. I can't stress enough that if you hear something, please don't ignore it because you could save someone's life."  Tom, we are so glad you are our neighbor. Hero, Good Samaritan, Good Guy... they all fit.

So does this:  Thank you.