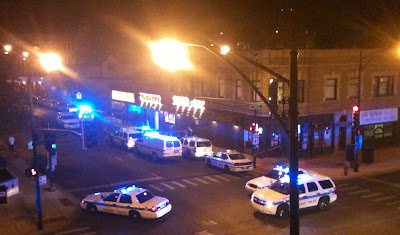 Very sad news to end the long weekend.  A 14 13-year-old boy from West Rogers Park was eating with his sister and a friend inside Laurie's Pizza at Foster and Broadway around 2:30 this morning when someone outside fired shots into the restaurant, which struck and killed him.

The victim was Ivan Alanis of the 7400 block of North Western Avenue.  No one is in custody.  Police said the shooting may be gang-related.

We remember from college days that Laurie's is open really late most nights, so it's not unusual to hear about people eating there in the wee hours.  What is unusual is hearing about shootings in that part of Uptown, right on the border with Edgewater.  Makes us wonder if Rogers Park's recent gang activity is spilling over into Uptown (given the victim's home address) or if it was a case of mistaken identity.

In any case, a very sad turn of events.  Our sympathies to the boy's family and friends, particularly those who were there and had to see it happen.

Coverage in the Edgeville Buzz, the Tribune, and CBS 2.

Update:  The Tribune has more information:  "At a press conference, Chicago Police Supt. Garry McCarthy said several people were being questioned in the shooting.  'I don't know about the actual business. But I do know that unfortunately, that young man had two separate gang affiliations,' McCarthy said. 'So at this point, it looks like it's gang-related. Obviously, (its) very early in the investigation...We actually have offenders in custody. They have not been charged yet, so we'll have a clearer picture very shortly on that case.'"  In the story, the young man's family denies he was affiliated with any gangs.
By Caring Neighbor - May 29, 2012