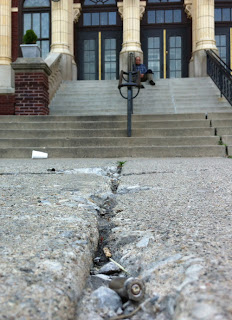 It's been a trip back to the bad old days this weekend in Uptown.  Don't know if the gangs are starting a new (senseless) chapter in their ongoing quest to annihilate each other, or if they've got spring fever, or if they think the police response will be reduced due to NATO being in town.  In any case, not fun for the rest of us.

Saturday night, several readers reported hearing gunshots in front of St. Thomas of Canterbury Church on the 4800 block of Kenmore.  A reader sent in this photo, taken Sunday morning, with shell casings clearly visible on the sidewalk.  He says:  "Guessing the shooters were aiming at the 7 or 8 AA guys and 6 or 7 AA girls drinking and smoking on the church steps. They all bolted South to Lawrence and then when all the cops showed up, maybe talked to them from inside the cop cars?, they walked West."

Then Sunday evening, many readers reported hearing quite a few shots fired, again near the 4800 block of Kenmore or Sheridan, possibly near the JJ Pepper's strip mall.  There is an unconfirmed -- stress, unconfirmed -- report that a bullet went through the window of a second-floor apartment at 4827 N Sheridan (the high-rise south of Gunnison).  We're getting no confirmations on whether or not anyone is in custody, but police were on the scene quickly.

Please be sure to stay safe and report any suspicious activity to 911.
By Caring Neighbor - May 21, 2012