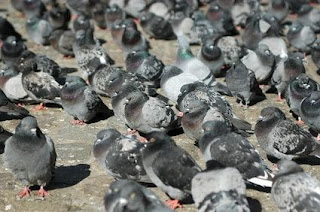 Alderman James Cappleman, who just celebrated one year in office Wednesday, was pelted with breadcrumbs by an Uptown resident, who is known throughout the community as the "Pigeon Lady."  According to the Chicago Tribune story, "A 59-year-old woman is accused of shoving an alderman she thought should have 'better things to do' than sweeping up breadcrumbs she left for pigeons" in the 800 block of West Wilson around 2:30 yesterday afternoon.

While there are many issues facing our community, we have received countless emails from concerned neighbors about the frequent feeding of pigeons by Ms. Yang.  Hopefully the Alderman was not injured in this incident, and that the offender has learned a lesson to help create a more peaceful community.

Sun-Times weighs in on the story, too.

Update:  Alderman Cappleman's response from the comments.  "I want to give an update on this matter to address everyone's concerns. Under the Wilson L, there is a lot of pigeon excrement on the sidewalk. Bread is tossed at this site everyday. When possible, someone from the 46th Ward Office sweeps it up due to concerns about the rat population.

Yesterday, I was sweeping the bread crumbs up when a car drove up and this incident occurred. Information from our office will be limited so as to allow the law to take its due course."
By Cub Reporter - May 18, 2012