Update: Some good news! A reader writes: "I was pretty sure I recognized the missing person, Harry Linsky. When I called the number listed on the website the police told me he'd been found yesterday." 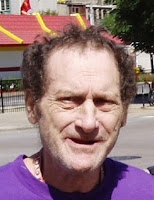 "Police are searching for a 65-year-old man who is on medication and went missing last Tuesday from the North Side in the city's Uptown neighborhood.

Harry Linsky was last seen in the area of the 4600 block of North Sheridan Road. Police said he suffers from schizophrenia and takes medication. Police described Linsky as a white man, about 5 feet 6 inches tall and weighing 143 pounds. He has blue eyes and brown hair and a light complexion, police said.