It's been a fast news cycle lately -- to put it mildly -- so we're going to try to wrap some things up in the next couple days with more information on the events that took place in Uptown over the past week. 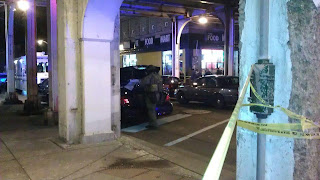 The pieces are slowly starting to fall into place about why there was such a large response to the three men barricaded inside 4639 N Broadway last week.

And it turns out there were three wanted men in there who were charged with a November murder in South Bend:

A fourth person also is believed to have surrendered to authorities, but there was no word tonight about whether there are any charges against him. Bentley says 20-year-old Sylvester Gamer is charged with aiding in murder and 18-year-old Forest Lamar Jr. is charged with assisting a criminal. Hunt and Gamer are being held without bond and Lamar was being held on $500,000 bond."

When we had our little smuggled-in transistor radio hidden beneath our desk at Stewart School in 1970, we never thought we'd get to live through a live version of this song, just a couple blocks away.  Life in Uptown, never a dull moment.