In light of the recent gang violence in Uptown, Chicago Magazine could not have picked a more relevant time to publish their investigation of Chicago politicians and their connections to gangs. In the recently released January 2012 issue, the article details several different Chicago alderman and their connections to gangs, in addition to publishing a map of gang territory in Chicago.

The 46th ward is featured prominently in this article. Former 46th ward Alderman Helen Shiller is the one of the primary aldermen featured in the article. The article spotlights Helen's connection to twin brothers, Rahiem and Rahmon Ali, two leaders of the Gangster Disciples. Rahiem had over forty arrests before his death. What attorney was defending him in court? The former 46th Alderman's son, Brendan Shiller.  [In a comment on UU's Facebook page, Brendan Shiller says, "I never represented either of the twins in a substantive criminal matter (although I would have in a minute)."] 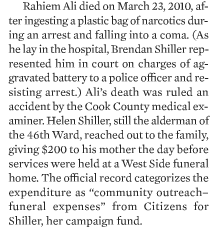 Yes, you read the last part of that excerpt correctly. Alderman Shiller helped pay for a gang member's funeral out of her political campaign fund. The article makes a clear connection between keeping the gangs on her side and keeping her political power in the 46th ward. 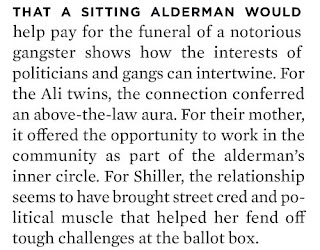 The article also cites Denice Davis, Helen Shiller's former Chief of Staff, who would frequently intervene when the police were trying to arrest and/or charge gangbangers. Sadly, police officers got the message, and a retired officer indicated that arresting a gang member "brought trouble" from the 46th ward office. 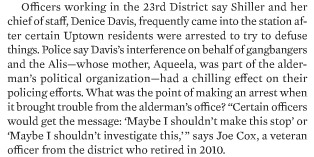 Several readers have contacted UU over the years about former Alderman Shiller's connection to the gangs in Uptown, but without documented proof, we did not feel responsible publishing those connections. We are grateful to Chicago Magazine for highlighting the connections that continue to burden our community.

We are publishing this post since we think it is important to all Uptown residents, both old and new, to know why we are still dealing with gang violence. At least five separate shootings in the last week, including one murder, is unacceptable, and we hope that all of us will work towards a peaceful solution to the end the gunfire in our streets.

Note:  You can see the entire article online at Chicago Magazine's website, here:  Gangs and Politicians in Chicago: An Unholy Alliance
By Cub Reporter - December 11, 2011