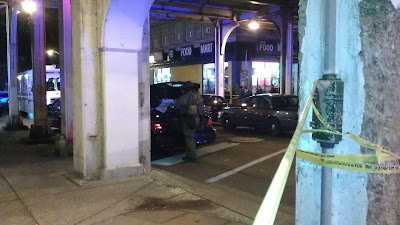 Big happenings on the 4600 block of Broadway starting sometime after 4pm.  It's closed to traffic, and apparently the Red Line is bypassing the Wilson stop.

According to a tweet from Ald. Cappleman:  "Broadway is closed at Wilson due to the police capturing a wanted fugitive from another state."

Per the cops, stay away from windows if you're in the area.  There's a barricade situation, we hear, and the SWAT team is moving in.  We would recommend staying off the streets as well.

Stay safe.  Keep an eye on UU's Facebook page for the latest.

Update: CBS is reporting that it's a possible hostage situation, and that the fugitive is barricaded in an apartment building of 20-30 units at 4639 N Broadway.  It also reports that the Red Line and Purple Line are closed between Berwyn and Addison as a precaution.

Update:  The news says the fugitive is from South Bend.

Update:  The southbound #36 bus is being rerouted.

Update:  Three shots were fired.  According to a tweet from the Alderman:  "The situation at Broadway and Wilson is not a hostage situation. One man is in custody."  There is a police helicopter shining its lights onto the tops of the buildings on Winthrop.