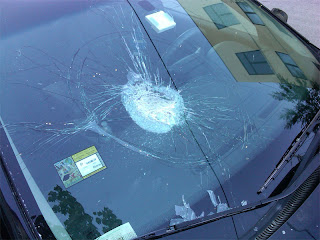 Readers have been sending in stories about car shenanigans all week.  Not sure why this is going on, if it's an increase in incidents, or just an increase in people reporting them.

Unless you stay with your car 24/7, there's not much you can do while it's parked outside, but please keep an eye out for people who might be messing with cars and call 9-1-1 if you see something suspicious.  As the cops constantly remind us, there's nothing a thief or criminal hates more than nosy neighbors who call police.  Be sure to report any problems to the police, too, so they can look at the patterns.

And be sure to keep up the insurance payments.  This is a big city and odds are we'll all experience something, sometime, no matter what neighborhood you live in.  Still sucks, though.