Cappleman & Thale To Be Honored By Dignity/Chicago Sunday 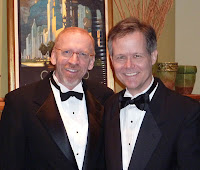 Dignity/Chicago will celebrate the thirty-ninth anniversary of its founding in 1972, and its ongoing ministry to the GLBT communities, family and friends with an anniversary Mass at 5:00pm on Sunday, May 22 at Dignity/Chicago, 3338 N. Broadway. Dignity/Chicago’s annual John Michie Award for community service will be presented to newly elected Alderman James Cappleman and his partner Richard Thale in recognition of their service in the Uptown neighborhood.

The Anniversary Mass will be followed by a reception in the church social hall. For further information, call Dignity/Chicago at 312-458-9438 or visit http://www.dignity-chicago.org/. All are welcome to attend.  Read the entire press release at Windy City Times.