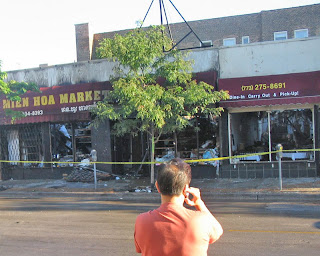 Back in the summer of 2008, there was a fire on Argyle Street.  Four of the six storefronts in a single building were gutted.

Then they were boarded up.  For more than a year.  Residents despaired of the blight and wondered how long it would stay like that.

The city brought the owners to demolition court, and rehab of the charred shell began in January 2010. 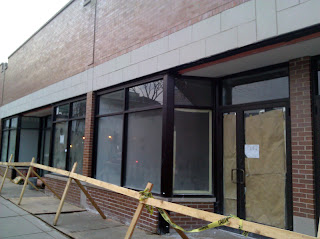 Now a neat new row of storefronts exists where the gutted storefronts were for so long. There are still dumpsters and caution tape in front, so they're not turnkey ready, but they look nearly done and quite smart!

It's so good to see something besides plywood and posters on the site.  We hope the new building attracts new tenants to Argyle's business district.
By Caring Neighbor - March 10, 2011