The Lights On Broadway (That Crazy, Crazy Town) 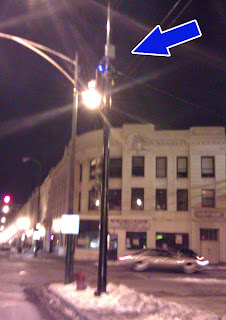 A reader pointed out that Wilson and Broadway has a newly acquired police crime camera.  While we don't believe that its presence will stop the shenanigans that take place far too often at that intersection, we do believe that what it records will help convict the criminals who consider that area their place of business.

We regret there wasn't a police camera there when Francis Oduru was shot in the head, a case that's still unsolved.  We wish there'd been a camera there when the young mother who was waiting for the bus with her baby was shot in the middle of the afternoon ... when the female pedestrian who had just moved to Chicago was shot in the back on Christmas Day ... when the gang riots happened after the stabbing on Magnolia last spring ... when police had to use a taser on a street rioter, causing "concerned citizens" to march to the police station to complain about police abuse ... when the windows of the currency exchange were shot out, and flying glass injured a senior citizen ... when a gangbanger fired 15 shots into a large group of people on a crowded summer evening.  We're sure a camera would have helped identify the guilty parties in at least some of those cases, all of which happened at one very troubled intersection.

Criminals hate cameras.  We saw Dennis Dawson, who was filmed roughing up an elderly man in his home's elevator, plea-bargain a sentence of 11 years because the entire attack was caught on tape.  We've seen taggers plead guilty just because a witness brought a DVD taken from a security system to court.  We've seen shootings solved because of footage from nearly security systems.  We aren't naive enough to think that this police camera will be the end to all crime at Wilson and Broadway, but we're sure glad to see it there.  Finally.
By Caring Neighbor - January 16, 2011