What Do We Need More Of At Wilson And Broadway?

You or I might answer that question... Safety? Cameras? Security? Police Presence? 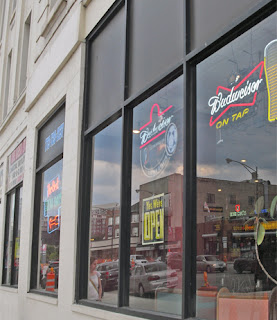 Apparently Ald. Shiller feels what Wilson and Broadway needs is...
MORE BOOZE! More liquor to go!
Because, you know, there just isn't quite enough drinking in that area yet.

At the last City Council meeting, Ald Shiller submitted an ordinance to lift the package goods (liquor-to-go) license moratorium in the 46th Ward that stretches "On Wilson Avenue, from Sheridan Road to Broadway; and on Broadway, from Sunnyside Avenue to Wilson Avenue."

Suddenly it becomes clear why Brendan Shiller's cop-suing colleague, who sent out the McJunkin rezoning notice last month, is being so coy about describing in detail the "more kinds of businesses" that a rezoning would allow.

If this moratorium is lifted, package good licenses will be allowed anywhere on those blocks, including the McJunkin Building, the strip mall behind the currency exchange at Wilson & Broadway, and all along Wilson, between Broadway and Sheridan. We don't foresee many problems there, right?

We must have somehow missed the community meeting announcement about this proposed change to the neighborhood that could have far-reaching implications.

We're also curious how Ald. Shiller plans to get around these rather specific requirements for a liquor license:

Neighborhood sentiment is also taken into consideration; each legal registered voter within 250 feet of a proposed liquor license establishment is notified when an application is filed. In some areas of the City, it may not be possible to obtain a liquor license due to restrictions such as "dry precincts" or moratorium areas that prohibit the issuance of additional packaged goods and consumption on premises licenses. It is also important to note that liquor licenses can not be issued to an establishment within 100 ft. of a school [ahem: Graeme Stewart], church [ahem: Uptown Baptist], hospital, day-care center, home for the aged, or library.

So let's see...
All these factors, as well as the community efforts that activated original moratorium, are ignored, and it goes straight to the rubber-stamp City Council. Typical!

If you feel strongly about this issue, we suggest you politely and courteously contact: